Do you know the difference between a tilt head or bowl lift stand mixers? Okay, these are just designs of stand mixers you will find on the market. Just like you could own two pairs of shoes, but when the pairs are of different designs. They could even be from the same manufacturer. This also happens in stand mixers. You could buy a tilt head, or a bowl head stand mixer version.

Owning a stand mixer is such a significant investment in your kitchen. However, despite the cost, we could, it is an invaluable kitchen appliance that many of us can not go without in the kitchen. The question on your mind, though, is whether you should choose to have a tilt head or bowl lift stand mixer. The operation of these two types remains the same; what changes is how to handle/operate them, especially when it comes to attaching or removing accessories to the stand mixers.

TILT HEAD STAND MIXER DESIGN –WHAT IT IS.

When asked to tilt your head, you tend to move it about on your neck. The same applies to the tilt head stand mixer, the head of the stand mixer rotates to move behind. It comprises of a lock which you need first to unlock, then bends the head behind, though some mixers will not have the lock function better like the artisan, just move the head behind. The tilting of the head is usually done when attaching or removing attachments such as the whisk, beaters, dough hooks. It can also be done when removing the bowl or adding ingredients to the bowl without stopping the mixer. This tends to simplify your work when using the tilt-head design stand mixer. The bowl of the tilt-head stand mixer design is locked to the bottom of the stand mixer when in use. 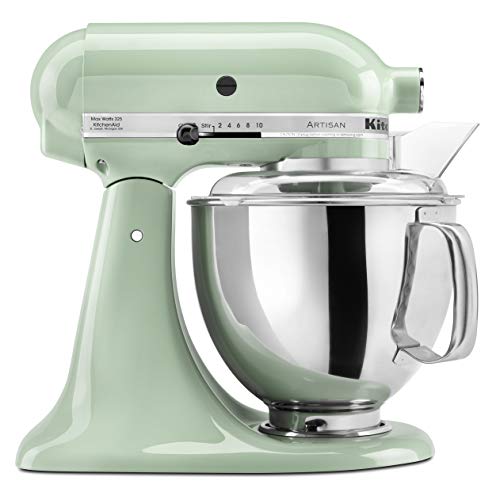 Click here to read our full review about this mixer.

BOWL LIFT DESIGN– WHAT IT IS.

Currently, our most recommended Bowl lift stand mixer is this one below.

Which Design To Choose? – Is it the bowl-lift Or the tilt-head?

For you to choose the design, you will follow the following comparisons to help you make the right decision.

With the Tilt-head design, it’s easy to attach and change the accessories you need, such as the dough hook, beaters than the bowl lift model. Just tilt the head and add the attachments you need to it. For the stingy dough, it’s easy to be removed from the beaters back to the bowl. However, for the bowl lift, you need first to remove or scroll the bowl down for you to change the accessories which can inconvenience you during your work.

Related post  [RECOMMENDED] - The Best Toaster Oven For You In 2021!

In terms of height, the Bowl lift stand mixers are taller than the lift head stand mixers, so the bowl lift requires more vertical space than the tilt-head design. This makes the storage of the tilt head easier as it is possible to store it under the counter within your kitchen.

Remember, power determines the performance ability of the stand mixer determined by its motor. The bowl lift stand mixers can hold powerful motors within their heads since no need to tilt them than the tilt-head mixers hence making them more powerful. Moreso, the heads of the bowl lift are not hinged, this makes them steadier than their cousins while in operation.

The Bowl lift models are highly known for their large capacity than the tilt head designs, so for those who do commercial baking, bowl lift is right when it comes to the quantity you can do in just one time. My opinion will be that they have a large capacity. After all, they are powerful because they can house the large motors enabling them to handle the large capacity. But still, nowadays, the tilt head designs have also started to have models of high capacity with powerful just like the Cuisinart 7-quart, 1000 watts.

When it comes to noise level, we expect most of the stand mixers to produce an inevitable noise while in operation but which one produces the greatest. The bowl lift stand mixer is nosier than the tilt head stand mixer.

For durability, it merely means for how long you can still use the mixer without it getting destroyed even with the hard work you go through. The bowl-lift design stand mixers are more durable than the Tilt-head mixer

Bowl lift stand mixers tend to be a little bit pricey as compared to their fellow tilt head stand mixers.

This website uses cookies to improve your experience while you navigate through the website. Out of these cookies, the cookies that are categorized as necessary are stored on your browser as they are essential for the working of basic functionalities of the website. We also use third-party cookies that help us analyze and understand how you use this website. These cookies will be stored in your browser only with your consent. You also have the option to opt-out of these cookies. But opting out of some of these cookies may have an effect on your browsing experience.
Necessary Always Enabled
Necessary cookies are absolutely essential for the website to function properly. This category only includes cookies that ensures basic functionalities and security features of the website. These cookies do not store any personal information.
Non-necessary
Any cookies that may not be particularly necessary for the website to function and is used specifically to collect user personal data via analytics, ads, other embedded contents are termed as non-necessary cookies. It is mandatory to procure user consent prior to running these cookies on your website.
SAVE & ACCEPT
Scroll to Top